← back to
Kill Rock Stars
Get fresh music recommendations delivered to your inbox every Friday.

Fanfare In The Garden 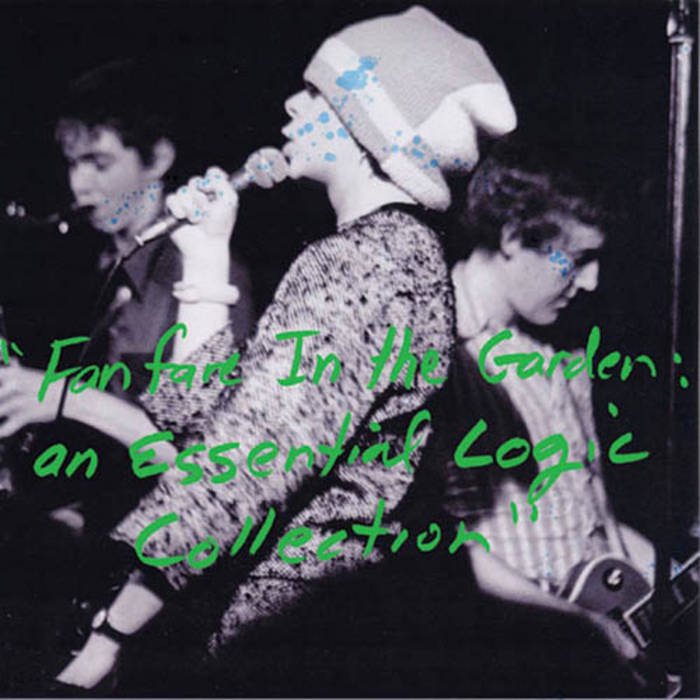 Chris Murray Lora Logic from X-Ray Spex, William Bennet from Whitehouse, and yet it's nothing like those bands. It's a magical post-punk sound to get lost in. Favorite track: Music Is A Better Noise.

The most interesting aspects of a vibrant new cultural movement are rarely at the heart of the grand parade. More often, they’re the next block over in a parallel street – where talented people, shaken up by the upheaval, get motivated and freed to make great art.

Punk rock did that for the English saxophonist, singer and songwriter Lora Logic. Lora – born Susan Whitby – was, briefly, a member of the amazing punk rock group X-Ray Spex. That’s Lora’s sax on the first Spex single, ‘Oh Bondage, Up Yours’ (1977). But what Lora did next was greater. Formed in 1978, Essential Logic drew a group of (male) supporting players around her explorations of a sumptuous blend of jazz, punk, beat poetry and squalling. To say ‘she broke new ground’ doesn’t come near it: how about ‘she colonised a new planet’.

The first EL single, on their own Cells Records, was ‘Aerosol Burns’ (1978) a furious stomp combined with what might be a tirade against domesticity but who really knows? Like many EL records, the vocals were another instrument, alongside Lora’s furious sax, but not quite as coherent. ‘Aerosol Burns’ was followed by an untitled EP on Virgin (1979) which was withdrawn after objections from Walt Disney – its cover featured someone in a Disney rabbit suit. Now, Lora was combining her EL work with a parallel existence singing and playing in Mayo Thompson’s late 70s/early 80s British incarnation of The Red Krayola – at that time, known as The Red Crayola (she is on the albums Soldier Talk (1979) and Kangaroo? (1981) and numerous brilliant singles, one of which, ‘Born in Flames’, is on this compilation).

Back being independent again, on Rough Trade, Lora went for broke. The EL single ‘Popcorn Boy’ was the new wave equivalent of a 3-minute rock opera starring love, sex, fear and envy in equal proportions. It was a good omen for the first EL album, Beat Rhythm News (1979), a delicious sweep through Lora’s angsty, funny, Dadaist beatnik world view. A string of sumptuous singles followed, each more polished than the last, but all consistently Logical. ‘Fanfare in the Garden’ was the poppiest: the first of Lora’s records to really iron out the kinks and get down to pop basics. ‘Music is a Better Noise’ (1981) was another dramatic, anthemic, cataclysmic pop song. The group were at turns funky, jazzy, sonorous and rambling – Captain Beefheart meets The Raincoats, drops water bombs on Blurt backing Yoko Ono perhaps, but remember – they could also be sweet as ABBA, The Seekers or 60s Bee Gees.
Sadly, ‘Music is a Better Noise’ was to be the last Essential Logic record for almost two decades. Work began on a second LP, but the group dissolved while recording and the album became Pedigree Charm, a Lora Logic solo record, in 1982. The album’s single, ‘Wonderful Offer’, was a work of genius, too, but a very different proposition: most of the discordant, free-jazz yelping was gone, replaced by dreamy pop. After acting in a film – Crystal Gazing – Lora retreated from the scene altogether, involving herself in her newly-adopted Hare Krsna lifestyle.

A few rare sightings were reported throughout the 1990s. Lora reputedly sang on a Boy George record; she definitely made another X-Ray Spex album with Poly Styrene. Then, unheralded, Essential Logic returned in the new millennium with a CDEP, available on the internet, and an album, Essential Logic 2. This new version of the group had only one original involved – guess who – and she reserved the right to clear the decks with each release. But, although the EP was classic EL (and featured Gary Valentine, once of Blondie, for added punk rock sheen) the EL2 album was a more delicate, serene creation. Either way, both proved that Lora was back; so back it was like she’d never been away. This compilation brings together the old and the new EL, with a scattering of other recordings that highlight Lora’s rampantly spiritual, smooth, funny, occasionally shocking musical personality.
Essential Logic’s old and new music is fresh, complex, and irresistible. Indirectly, via the legacy of the post-punk indie scene and particularly the role women took for themselves in it, Lora and her band/brand name changed the world. If you’ve never heard this incredible group, you have definitely been hearing echoes (ol’ Bjork springs to mind, unavoidably, but so do the new no-wavers of New York) for the past twenty years. And now you get the real thing.

Bandcamp Daily  your guide to the world of Bandcamp